Sixty seven students took part this year from four of the island's sixth form schools and colleges in which pairs of students are placed in a mock courtroom trial situation, dealing with fictional scenarios and judged at each round by lawyers from Collas Crill. The teams were coached by a selection of Collas Crill paralegals and trainees.

To establish what a moot actually is, the dictionary definition is “a mock judicial proceeding set up to examine a hypothetical case as an academic exercise.” Each school is designated advisors (lawyers that work at Collas Crill) who guide the participants on how to structure their arguments and approach the cases, hosting training sessions once a week. In terms of the structure of the moot, there are three heats, in which two pairs go against each other to present their argument in front of a judge, acting as plaintiff or defendant. From each individual moot the judge establishes who won the case and who won the most points, and therefore who won the heat; which is determined by the strength of argument, presentation, formality etc. At the end of the three heats, the two teams with the most points are entered into the final where they go head to head to determine the overall winner. This year the final took place virtually at the Royal Courts and presided over by Madam Deputy Baliff, Jessica Richards. 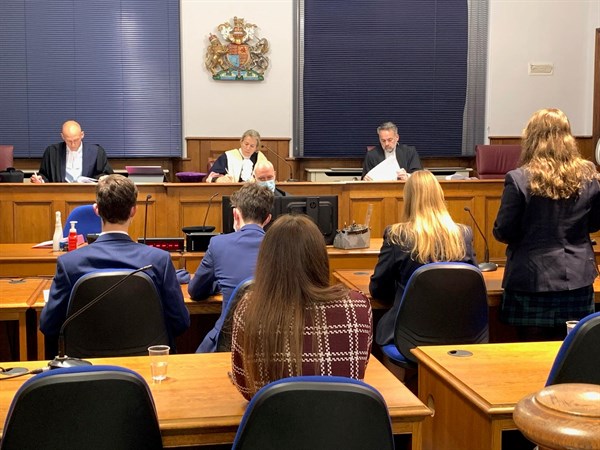 "We decided to partake in the Moot competition to challenge ourselves by trying something outside of our comfort zone. It helped us massively with our confidence in regards to public speaking and we loved the debate aspect. We managed to get into the finals against Jonathan Vickers and Josh Merrien where we presented our cases at the Royal Court. Unfortunately, we lost by one point but we are proud to have represented our school in the finals against our friends from Elizabeth College. It was a great opportunity for all who participated in the Moot and we highly recommend that students sign up next year because it’s important to try new things and challenge yourself, even if it seems daunting.

One of the partners in the firm's corporate, finance and funds practice and an advocate of the Royal Court, said,

"Reasoned argument is a skill that's essential whether you want a career in law, or are just trying to convince your boss you deserve a raise or to win an argument with friends.  The Moot provides a fantastic opportunity for students to improve their communication, presentation, research and analysis, all of which will be invaluable in the next step of their education and their working life. It's also a lot of fun and a great chance to experience the drama of the courtroom first hand.

This year's finalists were a talented bunch and it was a close-run race. Both teams had prepared well, presenting their cases around a fictional scenario with flair and ingenuity, but Elizabeth College secured the title narrowly edging out Amelie and Rosalie by one point."