Celebrating 100 years of Guernsey women having the right to vote

On Friday 9 October, The Ladies' College celebrated 100 years of women in Guernsey having the right to vote. Members of Soroptimist International of Guernsey, wearing costume associated with the women's suffrage movement, visited the College and spoke with Year 6 (Form III) and Year 7 (Remove) pupils about the history of female representation in the Island.

The States' reforms extending the franchise to Guernsey women over thirty were sanctioned by the Privy Council in October 1920, a century ago this month. It was to take until the December 1945 election, however, before the age of enfranchisement was equalised for men and women.

The students explored the reasons for changes locally, and were interested to see that the militant campaign of the Suffragettes in the UK was not mirrored locally.

Ruby (11) said, "I enjoyed making the banner and I like that we all added our own names and ideas so everyone was included."

Amia (11) said, "I'm surprised that after 100 years we still don't have many women in the States' in Guernsey and I hope that changes."

Suzie (11) said, "I am really thankful for the work of Suffragettes and other campaigners in the past."

Poppy (11) added "I think we have made lots of progress." Lucy (11) said, "Everyone should be treated fairly and equally in the modern world."

Bronwyn Henderson, Head of History commented, "It is particularly apposite to mark this milestone anniversary this month while we are also discussing with our students the process of current elections in democracies including Guernsey, the USA and New Zealand."

Women's representation in public life is also being explored by a number of Sixth Form students who have chosen this as the focus of their History A-level independent coursework, as well as a group of GCSE Drama students who are devising work on this theme. 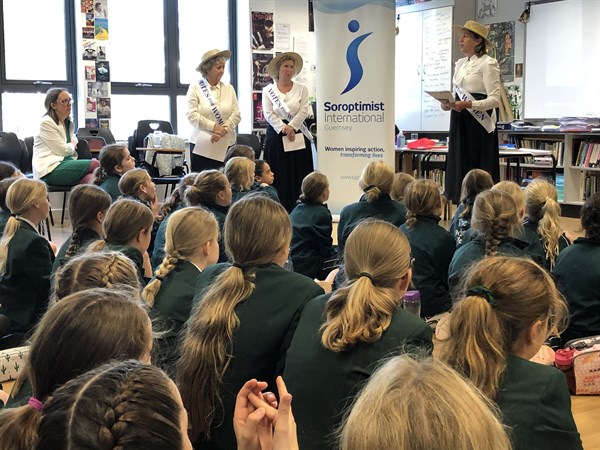 Soroptimists in Guernsey are also celebrating their 40th anniversary this year.  Cathy Bailey was delighted to bring members along to The Ladies' College in period costume to mark the centenary milestone.