Melrose are off to the jungle with their Junior Production this year, by putting on The Jungle Book on 6th & 7th April.

This musical will involve over 80 girls, aged between 7 and 11 years who will be taking part in two casts, over 4 performances. This classic show features well known favourite songs such as ‘I Wan’na Be Like You’ and ‘The Bare Necessities’. Jean Owen is the musical director.

The show has been a real team effort. Staff and parents have transformed the school hall and stage into an amazing jungle, with lianas, rope bridge aisles and even a waterfall. Le Friquet Centre have added to the set by lending an array of tropical plants. Parents have also helped by making costumes for the show.

All pupils in the Junior Department have been involved in the creation of the production, with girls designing programmes and forming both back stage and front of house crews, as well as performing on stage. Thus teaching them all the elements involved in staging a production.

Elaine Ozanne, director, said that she has been so grateful this year for the tremendous amount of hard work put in by staff, parents and girls. “Everyone has worked so hard and jungle fever seems to have taken over the school! Putting on a full scale production is a valuable experience for all those who perform, however, large or small their role. It increases self-confidence and promotes a feeling of team work, both important social skills. Above all the girls are also having a great deal of fun! 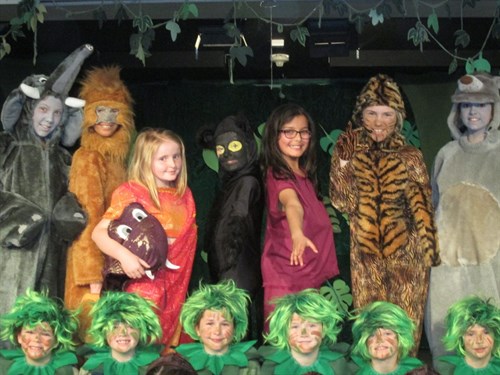