For the second year of the Christmas House Drama competition we were delighted to welcome back Dennis Burns, a well-known director and Panto Dame in the lively Guernsey Theatre scene. Once again he was an amusing, informative and a fair judge of the four Pantomime extract presented by the Houses on…

Four of our girls helped at the annual Community Awards event at St James on 6 November ().  This event is organised by the Guernsey Community Foundation and it celebrates the successes of local charities. Seven awards are given out and over 100 guests are invited.  Guests a…

It's that time of year again and the countdown to Christmas is underway at The Core.

With daily Advent themes such as Stars, Snowflakes, Holly and more, there is always a good reason to check out the latest tasty treats on offer.

I would like to say thank you to all the parents, staff and audience members who have expressed their congratulations and praise for such a successful Shakespearean production; it is greatly appreciated by all involved in staging Romeo & Juliet. Rehearsing on Sundays for ten weeks is always an…

The school held its annual Remembrance Day Service in St Stephen's Church. The Head Girl laid a wreath on behalf of the College and Emily McClean (pictured) played The Last Post ​before the traditional two minutes silence was observed. 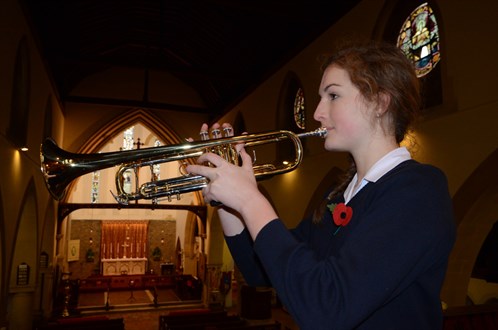 Congratulations to Clementine Thompson who has been selected for the 2014/15 RYA UK Youth Squad (Laser Radial). She is the top British Under 18 Laser Radial female for 2014. We are proud of her achievements and wish her every success in a busy year, where she completes her A levels, has House Offi…

Congratulations to our three winners who received Highly Commended for their presentations on Wednesday evening at the Duke of Richmond hotel. Their presentations were extremely well planned, interesting and demonstrated a very clear understanding of management issues. Although it must have been qu… 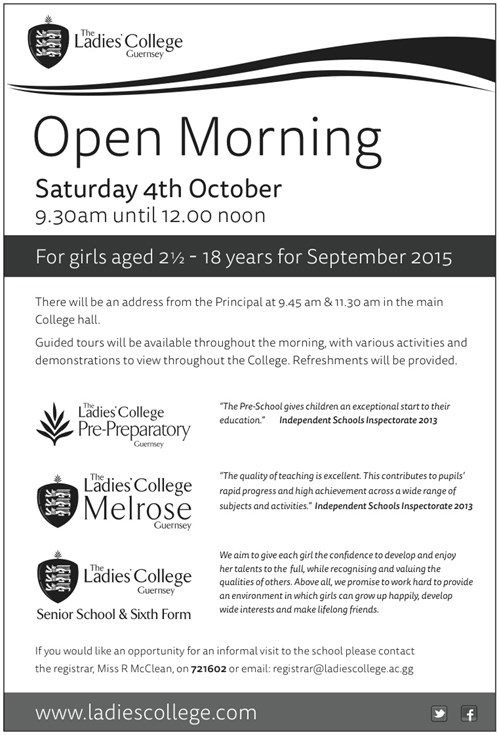 The Ladies' College held their first triathlon in warm conditions in late September 2014. The course which was staged around the College grounds involved a 200m swim, 2150m cycle and a 1000m run.  All of the 12 girls from Remove to Lower 5 who entered, embraced the endurance challenge that the even…

Alice Hudson recently exhibited MOTION, in pastels, at the Greenhouse, Guernsey Museum.  The Guernsey Arts Commission organised the event which was sponsored by NatWest and called 'Transforming: Seven of the Best'
Alice wrote:
"These pieces are inspired by the work of Simon Birch.  I …
NEWS  SENIOR SCHOOL , SIXTH FORM , ART
15.09.14

A sunny lunch time at The Ladies' College, being enjoyed by Melrose and Senior Girls. The Red Arrows provided fun entertainment for the College community. One of the jets even "waved" at us, as it flew by!

Two Ladies' College teams were placed first and second in the first CGI Coding Competition at the end of last term and were presented with a trophy and vouchers in recognition of their acheivement. The winning team, Teraformers, included Eleanor Buchanan, Elise Dorey, Rhiannon Oliver and Laura Wade…

This document has information regarding the first days of term.

The Ladies' College enjoyed a successful day on Monday June 23rd when they hosted the Grammar School for the Luscombe Tennis and Hainsworth Swimming Cup Matches.

Both teams were successful and as usual, participated in their events with enthusiasm and pride under the College banner. A very well …

Our GCSE and A level Art and Photography students are preparing to showcase their work this week at the annual Art Exhibition.

The exhibition will be staged in the Art & Drama building and looks set to be a truly impressive display of creativity, skill and hard work.

Senior School got the last half of the Trinity Term off to a flying start with the annual House Athletics Competition.

With the weather dry but not too hot Mrs Bailey was anticipating a great day's sport and she was not disappointed. There were some fantastic performances, records broken and a g…

Well done to Grainne Wrigley who was awarded 'High Commended' for her entry in a competition to design a postcard promoting Fairtrade.

Grainne, who is in Upper Four, was invited with her parents to a presenatation event to receive her award. Nine girls in Upper Four entered the competition, whic…

The Associated Board of the Royal Schools of Music