Aimee, Amandine, Anya, George, Harriet and Nicole recently presented a fencing Assembly. We thought you might like to see it:

George = Hi, I'm George and I'm head fencer of the school fencing club. Today we're going to explain the basics of how fencing works but also why it's such a great sport to get involved in.

Personally, I have been fencing for 7 years and the sport has become a big part of my life. Not only is fencing fun but it also improves your strength, stamina, flexibility and co-ordination making it an overall great workout. Similarly, fencing can have a positive effect on mental health as it is proven to reduce stress while also helping you to release aggression in a controlled environment. This allows you to focus, which is key, as Fencing is often referred to as physical chess due to the logic and strategy tactics behind the movements.

Here at school, we have 12 fencers on our team ranging from remove to lower sixth. Our training sessions run from 4:15 till 5:15 on Wednesdays in the gym and are led by Mrs Dyer who you may know from D&T. We will always start with a warm up and a footwork session. I know this probably sounds strange but footwork is actually a really important part of fencing that is vital to competing successfully. It basically involves practising how you move on the piste so stepping, lunging, and so on. We will then spend the second half of the session simply fencing each other. This is very useful for trying out new techniques that we have learnt and practising how to use them effectively but is also a lot of fun.

One of my favourite things about being on the team is the fact that we are all willing to encourage and support each other irrelevant of age differences.  This sense of community is very important when we travel to events such as The Public Schools' Fencing Championships which Aimee and Anya will tell you about now. 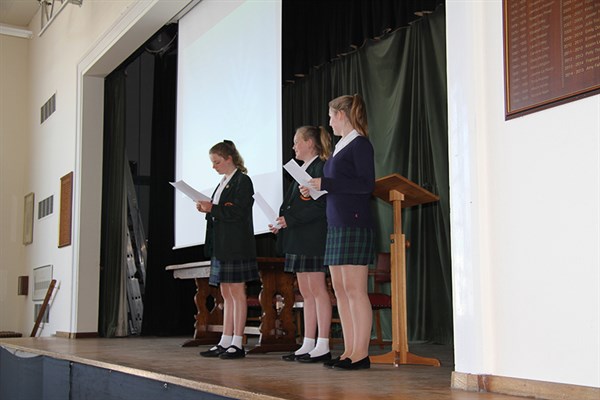 Aimee = The Public Schools Fencing Championships trip was one of my best experiences. It was great fun and everyone was friendly. Crystal Palace Sports Centre was amazing and enormous. I think my favourite part of the trip was fencing different girls of different abilities. Some of the girls were really friendly and I'm looking forward to meeting them again at future competitions. Overall I loved going to the Public Schools Fencing Championships and I can't wait to go next year.

Anya = My first year competing in the Public Schools Fencing championships was quite nerve-wracking but overall very enjoyable. I learned a lot from the competition that I hope to apply to my fencing back at training. I was very pleased with my results as both Aimée and I placed in the top 32 in epée. Marina placed in the top 8 and Ella came 9th in her age group. These were both great achievements. We also did well in the foil competition. In Mount-Haes foil, Aimée came 32nd and Marina came 11th. In junior foil, Raffi came 34th and Ella came 21st while in senior foil George came 22nd. We were also very successful in the sabre competition with Marina coming 3rd in Mount-Haes Sabre and Autumn coming 10th in junior sabre.  I look forward to competing again next year and I hope to see an improvement in my results.

George = I'm just going to explain a bit about the basics of how fencing works. Firstly, it is divided in three types or weapons. These are foil, epee and sabre. As it's the weapon we train in at school, I'll start with foil.

The foil has a flexible, rectangular blade which is about 90cm long and weighs less than half a kilogram. Points are scored when the tip of the blade hits the target which consists of the fencer's torso, front and back. Foil kit includes an electrically wired metallic vest called a lamé - a hit to the lamé causes the scoring machine to display a colored light on the side of the fencer that scored the hit. Meanwhile, a hit off target - on the arms, legs or head, causes the machine to display a white light.

Epee, which literally translates as sword in french, is a much heavier weapon at almost three quarters of a kilogram, and has both a thicker blade and larger guard.  As in foil, hits are scored only with the tip of the blade, however in epee the entire body, head-to-toe, is valid target - much like in an actual duel. Because of this there is no concept of "off-target" in epee.

The major difference between sabre and the other two weapons is that sabreurs can score with a cutting action using either edge of their blade not just their point. In sabre, the target area is the entire body above the waist, excluding the hands. The lower half is not valid target, which is meant to simulate a cavalry rider on a horse.  As in foil, the sabre fencer’s uniform features an electrically wired metallic lamé, which fully covers their valid target area. Because the head is valid target area, the fencer's mask is also electrically wired.

Amandine and Harriet are now going to demonstrate a few basic techniques that you would learn in your first couple of training sessions.

Amandine and Harriet come on stage.

George = Firstly Harriet's going to demonstrate a direct lunge. This is the most basic attack in foil and is the one of the first things you would learn. 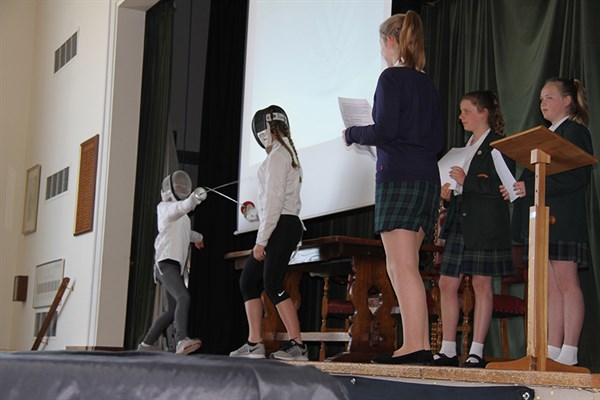 Another important but quite complicated aspect of foil is priority. I won't go into detail about it now but will just say that one way you can gain priority is by beating your opponent's blade like so.

The main way to defend yourself in fencing is by blocking your opponents attacks using a parry. However, parries can be avoided using techniques such as disengages as Harriet is about to demonstrate.

Finally, if Harriet combines the previous two techniques: beat and disengage she can use a beat disengage attack. This technique involves using your opponent's parry against them.

Although technique is a very important part of fencing, it's not the be all and end all. However, I understand the technical parts can seem dull or tedious. Because of this, we're now going to show you a video that really demonstrates how exciting fencing can be.

George = I would also like to point out quite how underappreciated fencing is as a sport. I have been told many a time that fencing is not a sport but simply just waving swords around. This really frustrates me as it clearly isn't true but if you're still sat there thinking "That looks easy. I could do that." then I challenge you to come along next Wednesday and give it a go. You won't regret it.

I'd like to finish with a quote: "Hit others first. Run with sharp objects. Always start it. Fencing: do everything that your parents told you not to do." Thanks for listening.

Thanks to all of the girls involved for sharing their interest, enthusiasm and commitment to this sport and we hope it might inspire others too.